Towards a quadruple birthday

These commemorations will have a special resonance in Belgium because, if Champollion may be regarded as the spiritual godfather of Capart, it is the discovery of the tomb of Tutankhamun, and the first visit of Capart there in the company of Elisabeth, the Queen of the Belgians, that led to the foundation of the Fondation Égyptologique Reine Élisabeth in 1923.

The Fondation Égyptologique Reine Élisabeth (today the Association Égyptologique Reine Élisabeth) – based at the Cinquantenaire Museum – is a non-profit organization designed to promote Egyptology in Belgium. From 1923 to 1947, it was led in a fairly paternalistic manner by Jean Capart, who also imbued it with exceptional dynamism. For several decades, the association contributed to make the Library of the Antiquity department of the Royal Museums of Art and History – of which the personal library of Capart forms the core – into one of the richest libraries in the world for the fields of Egyptology and papyrology. The association holds photographic archives on Egypt, participates in excavations in the Nile Valley, organizes lectures and exhibitions, etc. It publishes numerous works, and twice a year it puts out one of the most renowned scientific journals, the Chronique d’Égypte. One century after its creation, its members diligently continue the work begun by Jean Capart. 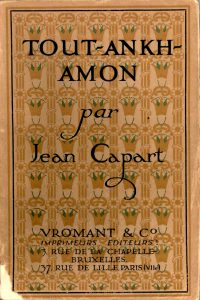 Original french version of the book. 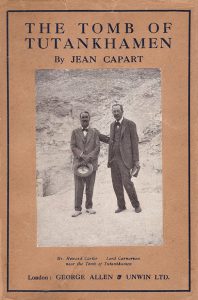 In this “little book of impressions,” as he himself defines it, Jean Capart describes the famous tomb of which he had the privilege to visit it as one of the first in February–March 1923, before its treasures were carried off. Although Capart escaped the “curse of Tutankhamun,” which would allegedly befall all those who violated the tomb, he did not escape the wrath of his British colleague Howard Carter (1874–1939), who blamed him for disregarding his rights as the discoverer. An international bestseller, The Tomb of Tutankhamen was repeatedly re-released in different languages (French, English, Dutch, Danish . . . ). 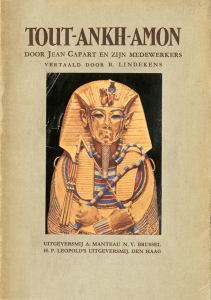