The Queen, the Egyptologist and the Pharaoh

On Thursday, March 12, 2020, under the aegis of Baudouin Falmagne, Hulencourt Festival is organising an exceptional evening with historian Jean-Michel Bruffaerts, Scientific Coordinator of the Jean Capart Fund. The lecture will be given in French.

With the participation of Her Royal Highness Princess Esmeralda of Belgium, Honorary President of the Jean Capart Fund.
Under the High Patronage of Their Royal Highnesses Prince Laurent and Princess Claire.

Almost a century ago, on February 18, 1923, the official inauguration of the Burial Chamber of Pharaoh Tutankhamun took place in Egypt, in the Valley of the Kings. This event, which received worldwide media coverage, had a particular resonance in Belgium since it was Queen Elisabeth who had the honour of presiding over the ceremony. For this occasion, King Albert I’s wife was accompanied by her son, Prince Leopold (the future King Leopold III), and Jean Capart, the founder of Belgian Egyptology. How did this momentous journey proceed? What were its repercussions for Belgian Egyptology? Under what circumstances was the Fondation Egyptologique Reine Elisabeth created? Why was Brussels considered the world capital of Egyptology during the interwar period? And finally: Why was a Jean Capart Fund created recently? Jean-Michel Bruffaerts will answer all of these questions. Accompanied by Her Royal Highness Princess Esmeralda of Belgium, granddaughter of Queen Elisabeth and Honorary President of the Jean Capart Fund, he will present photographs and documents, many of them still unpublished, mostly from the official and private archives of the Royal Family of Belgium.

HULENCOURT FESTIVAL
Thursday 12 March 2020, Dinner-debate, a collaboration with Le Soir
« The Queen, the Egyptologist and the Pharaoh »
SPEAKER: JEAN-MICHEL BRUFFAERTS
(The lecture will be given in French)

Princess Esmeralda of Belgium and J-M Bruffaerts in Elkab, 2014. 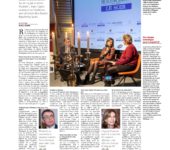